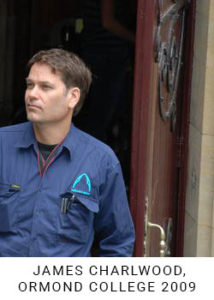 James Charlwood is one of Australia’s leading stonemasons in the field of traditional stonemasonry and conservation, with a career that spans more than 23 years. He has travelled widely and studied extensively in that time and today leads a company that is renowned for its balance of traditional restoration skills and contemporary conservation techniques.

In 1986 James completed his apprenticeship working on the heritage buildings at the University of Melbourne. He was then awarded a scholarship with the Winston Churchill Memorial Trust, seeing him work throughout Europe, North America and Britain until returning to Australia, where he launched his own business, Cathedral Stone, in 1987. Since then James has managed the restoration and reconstruction of an extensive list of Major Heritage Projects in Melbourne and regional Victoria. These include St Paul’s and St Patrick’s Cathedrals, Ormond College, Melbourne Grammar School, Maltzahn’s House, Melbourne GPO, St Andrew’s Historic Graveyard (Brighton) and Ceres Temperance Hall.